Cluj’s Silent Heroes: The Untold Story of the Cluj Crusaders 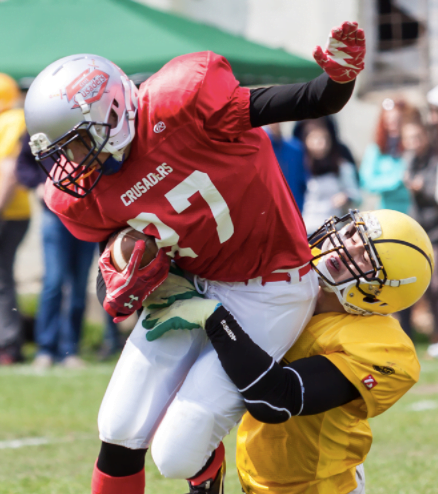 Just down the street from Iulius Mall, nestled in a patch of grass riddled with mud tracks, stones, and “gifts” from the adjacent dog park, a little known faction within Cluj gathers multiple times a week.  Individuals from various backgrounds, nationalities, and places in society come together to form an extraordinary bond.  They have created something out of nothing, are fluent in optimism, and doused in resilience. They are the Cluj Crusaders, champions of Civil Society. 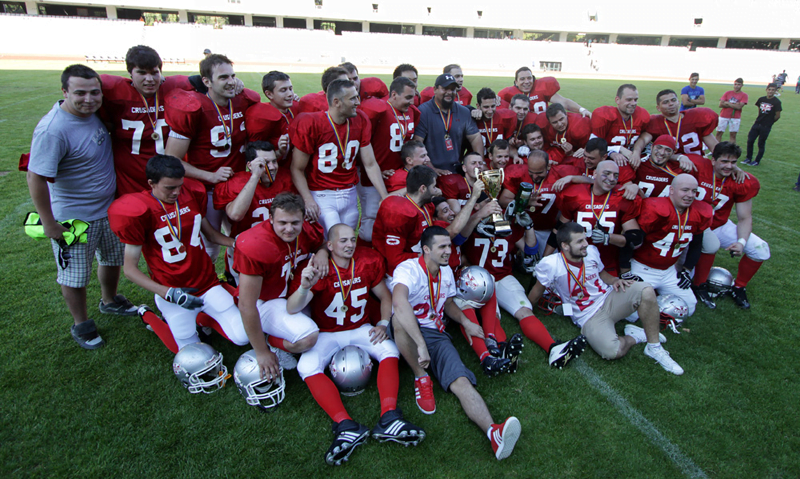 Five years ago American football in Romania was an unthinkable idea.  There were no official teams or league, only a number of citizens who were fans of the game. It is logical to wonder why anyone in Romania would want to play American Football as a hobby.  It is expensive.  A full set of standard equipment costs over $1,000 per person.  It is difficult to learn.  Each player is expected to memorize a playbook consisting of a variety of plays and formations.  Most importantly, it is tests the limits of the human body with physicality, endurance, and mental aptitude.  So why would of group of young Romanian’s decide they wanted to play?  Simple, they saw it in a video game.

On a fateful evening, Rafa Ruiz, a Mexican international living in Cluj, was taking a stroll with his daughter when he came across a group of guys playing the sport.  Ruiz, a former player and student of the game, introduced himself to the players and quickly realized their passion.  Like most Romanian’s, they were humble individuals and eager to learn.  With Ruiz willing to coach they decided to form the first American football team in Cluj, the Crusaders.  What they didn’t realize is their first opponent wouldn’t be another football team, but one of Romania’s fiercest competitors:  government bureaucracy.

The Road to Recognition

Bureaucracy in Romania is stifling.  It suffocates creativity, battles ingenuity, and discourages all that lay before it.  If the Crusaders wanted to play the game they loved, their first opponent would be the Bureaucracy.   Why?  Because in Romania it is illegal to play a sport that is not officially recognized by the government.

So the humble Crusaders, consisting of a handful of 20 year olds and a foreigner, decided to accept the challenge that would take over two years and 2000 RON of their own money to complete.  Two years of bureaucracy, legal nuisances and hundreds of hours of their free time – just to play a game.

It didn’t take long for the Crusaders to realize sporting law in Romania is harder to understand than a Scottish accent.  In order to submit a request for American football to be recognized, they had to be an established “club sportiv”.  But to become an established club sportiv, you must play a sport already recognized by the government.  Without commenting on the logic of the law, it presented a problem to say the least.

How could the Crusaders overcome this obstacle if the sport they play is illegal?  Being the wise and versatile group they are, they decided to play another sport.  And they played the only other sport that incorporated a few individuals who despised running and possess the ability to eat a kilo of ‘’mici’’ in one sitting: Power Lifting.

But since the leader of the initiative, Ruiz, was not a Romanian citizen, it would be mandatory for him to pass a language proficiency test before their application could be reviewed.  The challenge suddenly turned personal, as most civil initiatives do, and it would have been easy for Ruiz to walk away.  But he taught himself Romanian, passed the test, and remains fluent in the language today.  Thus, the Crusaders gave birth to the first official American football team in Romania, even if it was disguised through powerlifting.

After traveling to Bucharest, twice, to receive the paperwork in person, the Crusaders overcame the first legal hurdle to play.  Now came the practical challenges, collaborating with the other teams in Romania to form an association so American football could be recognized as a sport.

What Ordinary Citizens Can Create

When the teams first met it seemed the task might be too great.  Pessimism, skepticism, and every other excuse Romanian’s give on a daily basis to not follow through were thrown on the table.  An attitude, which is not without warrant, due to bureaucracy crushing social initiatives and shattering aspirations more often than not.  But this time it was different.

The Crusaders had come too far, worked too hard, and would not be defeated.  It took nearly 2 years, 3 different sports ministers, and enough stamps to make a bureaucrat’s hand cramp, but the Crusaders succeeded.  Romanians throughout the country were able to coordinate, work together, and put aside their differences for a passion they all shared.  The credit goes to all of them.

They had to prove to the Government that American football was already played by hundreds of Romanians, it was played in at least 4 different counties, and the entire rulebook was translated.  They even played three live demonstrations for the Sports Minister because he could accept their bid.  As a group they succeeded, at their own time and expense, but they succeeded.

The American football teams in Romania, now numbering eleven, have continued to work together and accomplish even more.  An association and academy for referees was formed, medical standards applied, field regulations adopted, and there is even a discipline committee to ensure the game is played properly.  It is an extraordinary feat accomplished by ordinary Romanians working together.

The Crusaders are a living example that ideas, coupled with action, can become a reality in Romania.  They demonstrated that with determination, courage, and resilience, average citizens can make a difference.  The proof is displayed each year as the Crusaders still take the field in Cluj, five years after their formation.

The Crusader’s roster has grown steadily each year, but it is not without challenge.  The team and league are completely self-funded.  A sport like football requires investment.  Usually, these investments come from the city or local government because of the positive aspects the sport brings to the community.   But this is not yet the case in Cluj.

The Crusaders have no field, no facilities, and even worse, no youth academy.  Numerous requests to city hall for help have been submitted to no avail.  I hope this changes, because the Crusaders are great ambassadors for how citizens can make a difference in the community.

Why the City of Cluj Should Care

Cluj prides itself on its progressiveness and there is nothing more progressive than civil initiatives built from scratch. The Crusaders were youths leading their own initiative years before Cluj was the “Youth Capital” and never received any help along the way.  It is an organization representing the best qualities of Cluj, beginning and ending with amazing individuals, typical of what makes Cluj so special.

American football is more than a game and the Crusaders are more than a team, just as Cluj is more than a regular city. It is an organization open to everyone regardless of experience, physical capabilities, or nationality.  What occurs is the development of attributes desirable in any modern society.  Respect, camaraderie, and understanding what it means to be a part of something bigger than oneself is mandatory in American football.  No individual can win or lose a game.  The result is a reflection of a group effort.  Imagine how great Romania could be if every citizen adopted this attitude?

The Crusaders also aspire to provide a youth academy for children.  With an immeasurable impact on personal development, the academy would be great addition to the community.  Where the education system falls short, kids would learn the basic fundamentals of running, stretching, and weightlifting as the team continues to work on them today.  And don’t worry, children learn the game through flag football, without tackling, until they achieve the proper skill set to advance.  However without a stable location or facility this dream is not possible.  The youth, in the capital of youth, lose out on an opportunity.

Lastly, the Crusaders have proven they are committed members of civil society.  Nobody ever asked them to give back to the city of Cluj, but they do.  The team takes time out of their personal lives and wallets to help.  They volunteer at schools, donate blood to hospitals in need, as well as bring awareness and raise money for Autism in Romania.  Around Christmas they provide new toys and spend time with children in orphanages.  But it’s not all serious, they throw a Super bowl party every year so the citizens of Cluj have a chance to watch the world’s most watched sporting event.  All of this is a reflection of the type of impact an organization like the Crusaders can have on the community.

It all started with an idea.  An idea brought to reality through the perseverance of ordinary citizens.  They are a multi-cultural family of men restoring faith in what is possible when people work together.  The Crusaders had every opportunity to fail, feel sorry for themselves, or just walk away and complain about what is wrong in Romania.  Instead they are a small example of what can be achieved when people can put aside their differences and unite around a common goal.  Their initiative was started for themselves but has grown to impact others who didn’t even know they existed.

Cluj should be proud to be able to call itself the home of the Crusaders.